Tato est comme un gros bébé. De tous, il est le plus gros chat mais aussi celui qui a le plus besoin de câlins, mais alors tout le temps. Il l'a fait à la minute où il est arrivé et n'a pas changé cette habitude. Visiteur qui vient, visiteur qui est assailli pour dose de câlins! Que lui est-il arrivé petit?? Ce qui lui est arrivé comme un chaton (difficile de l'imaginer étant petit :) il est plus d'un chien. Il aime les visiteurs et vous sera collé au point qu'il est parfois un peu ennuyeux. Mais maintenant tout le monde le connaît pour ça et le trouve vraiment drôle. Et quand les gens viennent, c'est avec l'espoir de voir ce gros chat noir câlin.
Although his character with people is that of a teddy bear, outside in this wild area of ours, he had to establish him-self a reputation. And he did that for the biggest part of two years. His opponents were constantly required to show him respect or he would show then his beautiful teeth and claws. This side of him is not one he particularly showed in the previous house. It is only in these very woods that I discovered his wilder side. Probably in response to the wild out there! I should have listened to that sign...
Other than that, he is a rather pacifist and playful cat. With the ones home, he is only willing to play. With the exception of Oliva. For some reason he did not like her. And to my dismal he would throw him-self at her with the same rage he would display outside of the house. Next you find me shouting.

Tato loves eating. Put good and tasty dry food and next you see this big guy, all his head in the bowl eat it all. Not to mention canned food or the tasty chicken I cook for them.

You can send as little as 1 Euros as up to the amounts referred on the left.

You can also send goods if you prefer. Contact me for a delivery address. 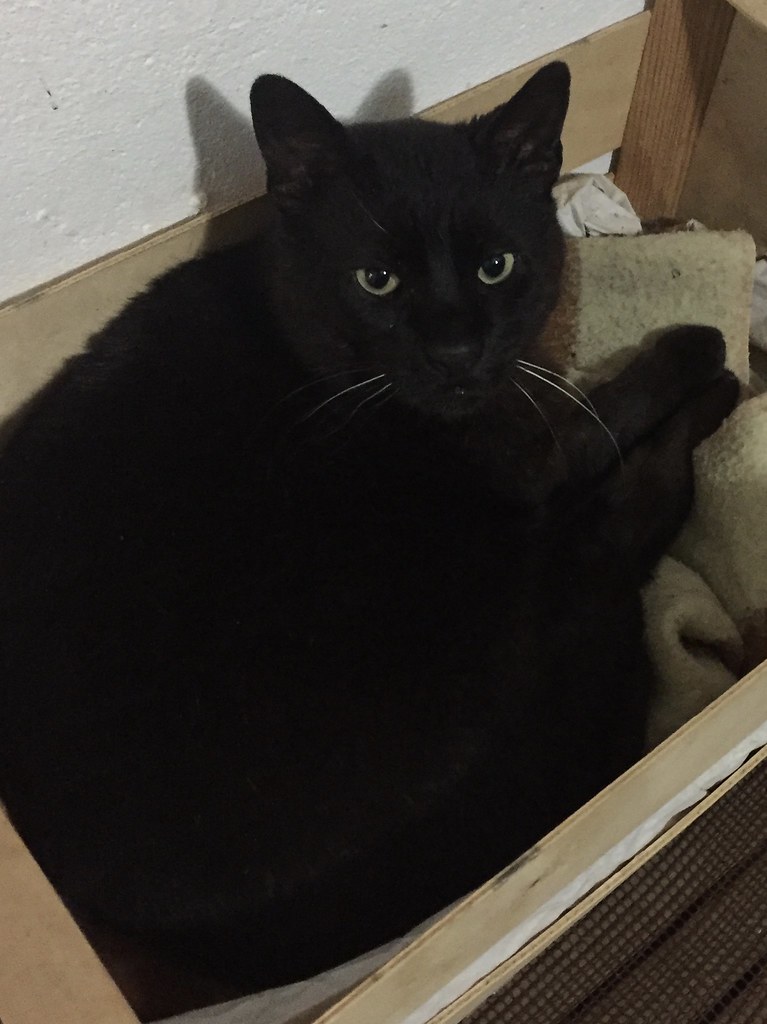 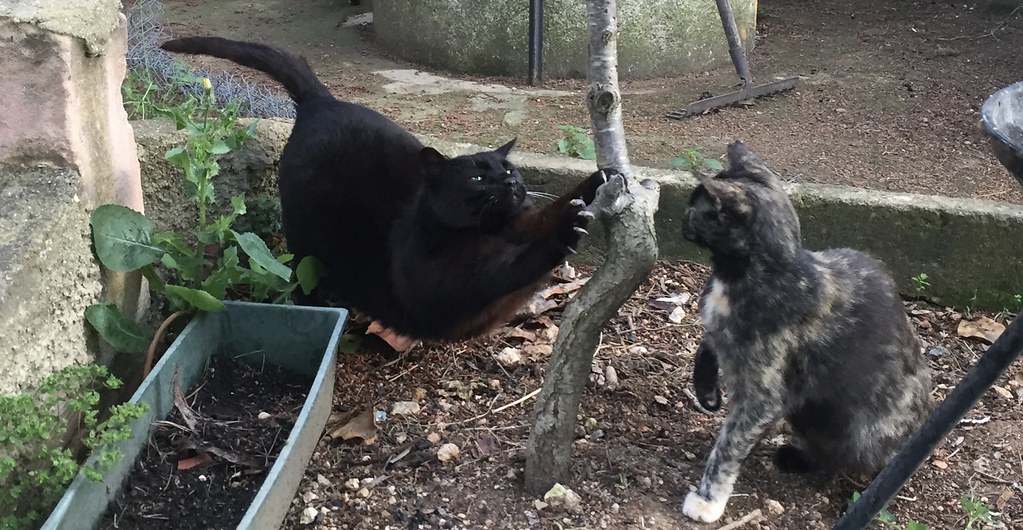 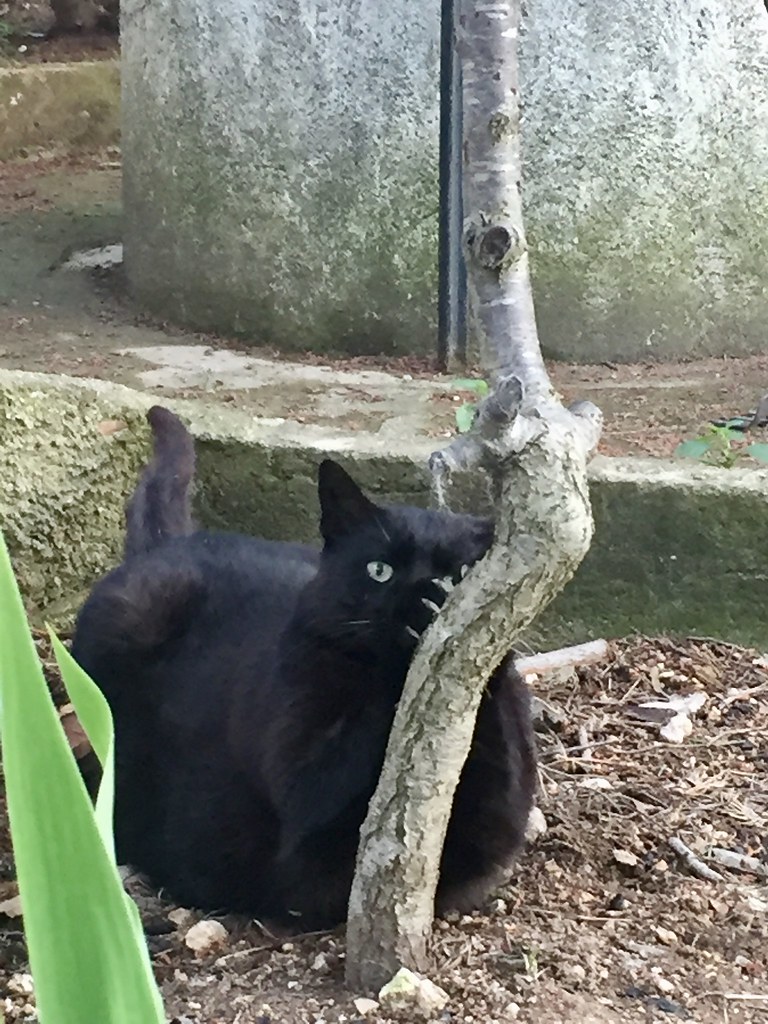 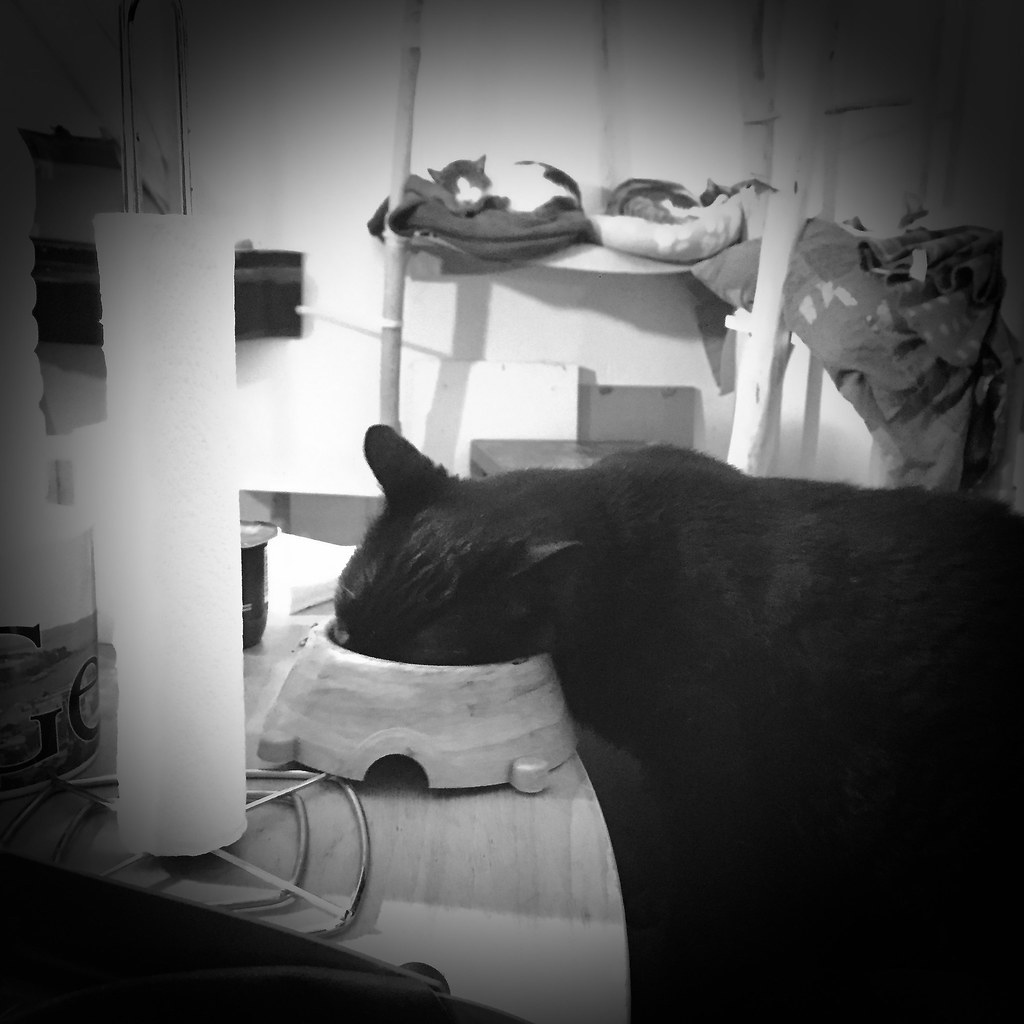 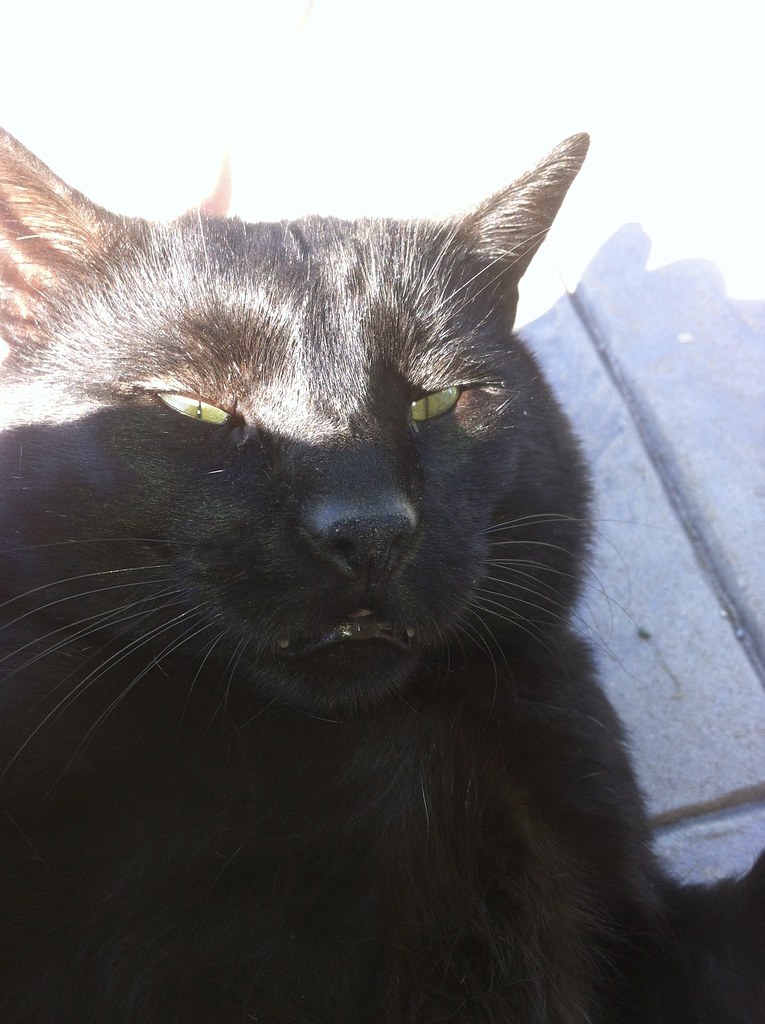 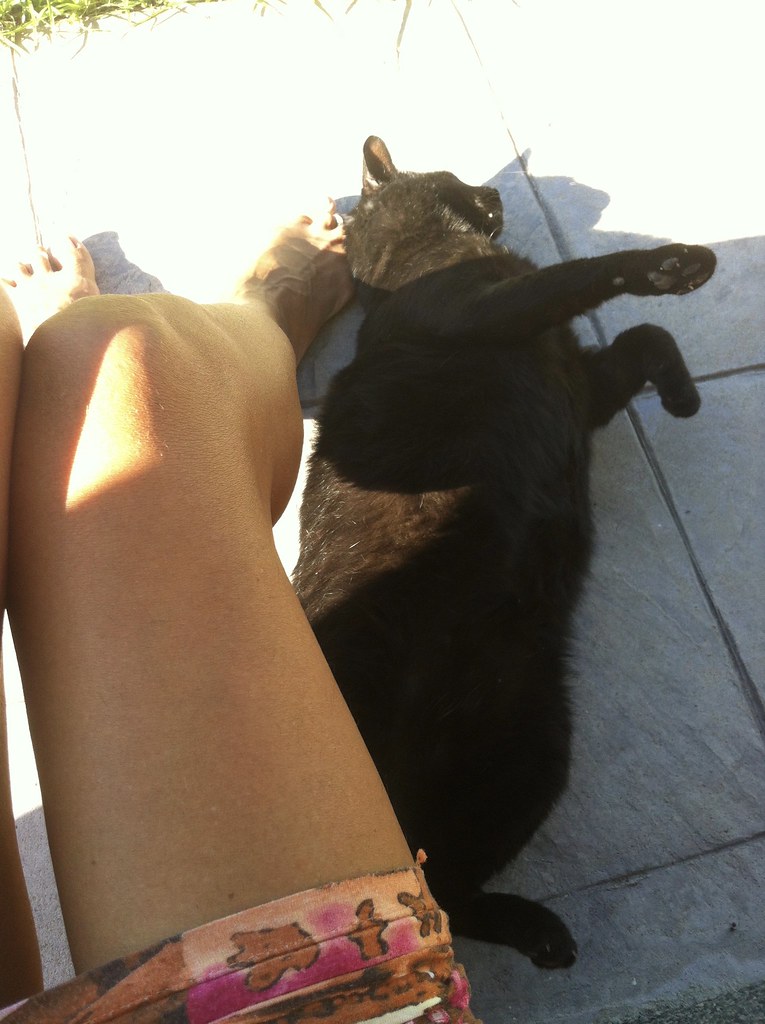 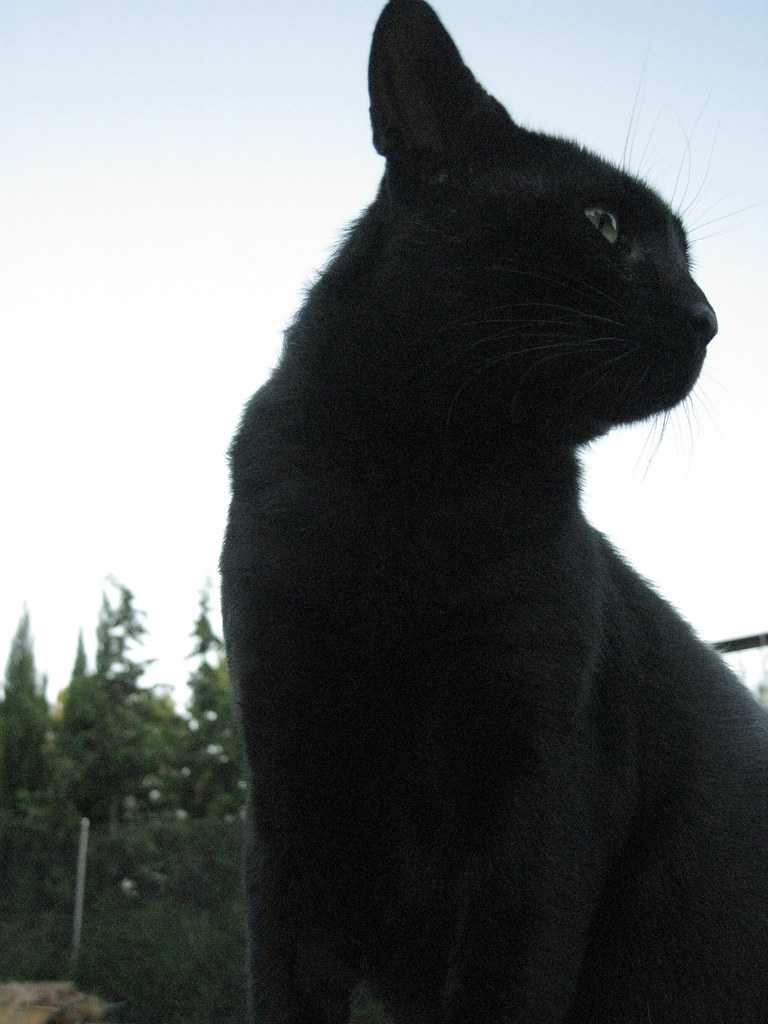 Tato is probably the most easy going cat I have ever known. He is bigger than a small dog. But he would never do anything to harm you. I compare him with those big guys on Harley's that are actually real Teddy bears.

His story begins in May 2013 when he appears one evening. I had been hearing many fights at night, in the trees around the house. I'd go out calling for Lilith because the voice was very similar. A high pitched female cat voice.

He, nevertheless, was now part of the household and had the food he liked, toys, friends and big garden he was never leaving. I tried to put him on a diet with specific dry food, which seemed delicious to all other but him. And eventually we overcame the flea and transit disorders. He became a beautiful black cat of an unknown age but most probably over 5-6 years old.

His best friend was China, a tiny female that had crossed the fence next door when only a tiny sick baby, She was now a young playful female full of energy. And so China and Tato had very funny fights where she was always the winner and Tato would be on his back screaming his aaaaaahhh, super high pitched. Quite hilarious!

A few months later, I found a cheaper and cute little house in the woods. And obviously I move everybody here. I did not manage to put him in the normal cat-carrier so he spent the trip on my left shoulder ... that's how he felt comfortable... not me. But anyways we got to this house, it was past 10pm. Because he came all by him-self and because I totally trusted his instincts we both jump out of the car and he started smelling this new place. He started wandering about and probably went in the woods. That night I did not see him anymore. Sometimes I wonder if he was that cat you abandon. Maybe the car new odours... maybe he knew all that already.

By the morning he was on the terrace overhanging the road, which is more a dirt track. He turned to me, came for food and cuddles and that's about it. He started living here as if he already knew it.

And then our new routine here started. A couple of months later, came Athena and Apollo. Athena and Tato shared a very similar life on the kitchen terrace side and then going out to the woods where each had its favourite spot. They never were friends, never were enemies either. They had their life now in a house when they both came from the streets.

At the beginning all was perfect.

The house back then, did not have any fences. Any other cat was able to come by, with or without good intentions. So that's when Tato, saw some intruders and he decided to claim his own territory.


By the autumn of 2014 the cathouse had more inhabitants and in the spring of 2015 the number increased again.

Too many, to Tato's taste.

All that summer, I knew Tato was fine, because I'd spotted him here and there, but he would not come home. Did his chasing Mr. Wild bring him far away? Too far way? But then I would suddenly see him eating from the outside bowl. The food being available most of the time, he would sleep where ever and come when ever. I always left him free in moments most of the other cats where in the fenced part of the house. Tato was never locked. Or only by mistake. He did not like it but it was no drama either. He would sit by the door, obvious sign that he wanted out.

And I believe that his rivalry expeditions also got him into visiting neighbouring houses. And by the end of 2015 he established him-self single dweller in another home. A new neighbour who seemed to be a cat lover had settled not too far away. Eventually I made contact with him and explained about Tato. The guy seemed more than happy to have him. All by him-self again, Tato had found him-self a new forever place.

He was not stay there alone for very long either. But all was fine for quite some time. He found a much less stressed human, with more love to give, much more room and food just for him.

In 2016 however, by the end of that summer, Tato was showing up again constantly for food.

At first, I suspected it was because I give mine more than dry food. Once a day they get either wet and tasty cat processed foods or some real meat from either fish, chicken or beef.

My late night job, made me show up around 2am and there he was waiting.

And that's when the weird behaviour started. Tato would eat and suddenly rush back in the woods followed by piercing shouts.

Between the two houses, we lost time. Nobody was doing anything, thinking the other would.

And then the neighbour had to move. He expedited his going away in three weeks but could not take the cats where he was going. So I offered to take care of the cats until he could again. Five cats, Tato, Loulou, Pandy, Patty and Lala.

Sometimes humans, we are bit useless, we have are own priorities and the pets can only suffer the consequences. But Tato either sensed all that turmoil or his condition made him come back home a little before the other kitties. By the time the girls came here, Tato was already all set for a couple of weeks. No longer going into fights, not moving much.

I lost too much time if you ask me, but eventually I found a deal for Tato's mouth issues with a close by vet. They did the cleaning, and told me it would be ok within a week. It didn't. No drastic changes, he still could not eat dry food, not after a week, not after two. At the vet, I just got to know he suffered from Stomatitis. Good to know, but now what? He had lost weight becoming a normal sized cat maybe for the first time in his life, or at least I have never seen him like this. I somehow managed to find things he would like and would not hurt, but it was not quality food.

Finally returned to my usual vet. He suspected something deeper.  Fel-v or feline leukaemia. After testing his blood, it turned out, Tato was Fel-V positive. Fel-V is like Aids, for those that are not acquainted with the feline world. This auto-inmune condition triggers, from some normal tar accumulation around the teeth, an abnormal response from the system. As a result a massive inflammation of the gums, end of palate and beginning of the throat. This is what was causing the yelling. Even something too rich, like the A/D restorative care was something he could not take.

At that stage the question was: So now what? How can he feed him-self? To vet explained the next steps but what we could try in the meantime.

Now Tato eats "cooked"  dry food. His bowl has this mashed consistence but he likes it. He eats it with tuna or some other tasty toppings so that I can also stick there some medication when the drooling starts again. The drooling is a sure indicator the inflammation is back. We tried the anti inflammatory injection, but sincerely it has not been that effective. So next, and very soon, we need to plan the teeth removal. The vet says this should allow a better quality of life for whatever time.